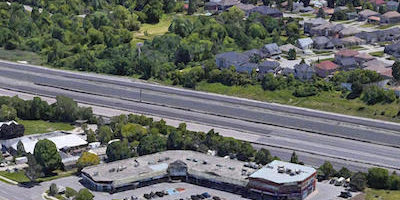 Decade Capital has closed on what its founders, Idan Mizrahi and Mike Siskind, call a “marquee acquisition” in the Greater Toronto Area city of Pickering.

The Toronto-based company acquired a 2.2-acre site at 375 Kingston Rd. occupied by a 27,500-square-foot retail plaza for $16 million from Pickering Square Inc. in a private transaction fully funded by Decade Capital. Current tenants include a butcher shop, an organic grocer, a doctors’ office, a dental clinic and a physiotherapy clinic.

“It’s a gateway site, as identified by the City of Pickering, and it’s also part of the Kingston Road intensification plan that the City of Pickering has put in place that will shape its new official plan,” RENX was told by Siskind during an interview with Decade Capital’s co-founders.

“We’re acquiring the plaza with tenants in place. Eventually the plan is to redevelop it into a mixed-use site including two residential towers.”

Decade Capital is in the initial stages of planning for the site and will submit a rezoning application to the city this fall. Siskind said it’s too early to release many details, but the plan is to have retail at grade with two condominium towers rising above which will offer views of Lake Ontario and the Rouge Valley.

Siskind said Decade Capital’s development, which it plans to build on its own without partners, will provide affordability for buyers and easy access to Highway 401, the Greater Toronto Area (GTA) and natural areas for recreation.

The property is on the western edge of Pickering in the affluent Rougemont neighborhood. The Kingston Road corridor in the area is largely a collection of low-rise strip malls, larger retail plazas and car dealerships and is ripe for redevelopment and intensification.

An existing Metrolinx rapid transit bus line will be converted to a bus rapid transit line (BRT) along the corridor from the Rouge River at the western border of Durham Region eastward through to Oshawa.

Construction is expected to start within the next two years and Durham Region Transit is working to create north-south bus connections between the BRT line and a GO Transit station.

Pickering’s population is approximately 90,000, and that’s expected to double within 20 years, so Decade Capital would like to grow along with the community.

The largest ongoing development in the area is Durham Live, a 240-acre mixed-use development site at the northwest corner of Church and Bayly Streets. At full build-out, it’s expected to include a casino (which is now open), a hotel, a residential component, a distribution centre, a water park, an outdoor amphitheatre, a performance hall, 150,000 square feet of retail space, restaurants, a movie theatre, a golf course and the largest film studio in the GTA. Durham Live is expected to create 10,000 wide-ranging jobs.

“We see Pickering as a place for growth, affordability and lifestyle,” said Siskind.

Decade Capital was founded in January 2020.

Mizrahi built his real estate career as an acquisitions manager at Minto, where he was responsible for more than a billion dollars of acquisitions as well as the development of high-rise and low-rise communities.

He then leveraged his experience to acquire, develop and build his own portfolio of real estate assets as well as a real estate-based tax company called HST Rebate Canada.

Siskind has been a developer for more than 20 years and came from Decade Group, which has done multifamily, commercial, industrial and self-storage development across Southwestern Ontario. He’s been actively involved in acquisition, planning and development, structured financing, construction management and asset management.

Siskind also founded Self Storage Plus and negotiated the sale of multiple facilities for more than $60 million to InStorage REIT as one of its qualifying assets.

Without disclosing any other details, Mizrahi said Decade Capital is in the process of closing on a large industrial site in Mississauga.

Decade Capital will continue to search for development and redevelopment sites in Durham Region, the Greater Toronto Area and across Ontario, according to Siskind.

“We’re working on other major transactions that are leveraging the experience of the partners and the developments we’ve done in the past,” he said.